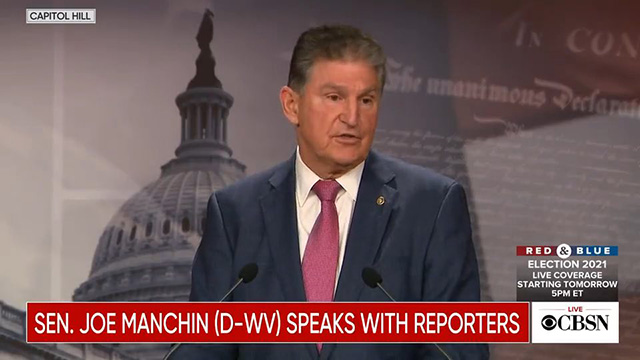 Sen. Joe Manchin (D-WV) has publicly announced he won’t vote for the Biden administration’s Build Back Better legislation because of the cost.

But behind the scenes, he’s reportedly told colleagues he thinks low-income folks will squander the government assistance.

In recent months, Manchin has told several of his fellow Democrats that he thought parents would waste monthly child tax credit payments on drugs instead of providing for their children, according to two sources familiar with the senator’s comments.

Continuing the child tax credit for another year is a core part of the Build Back Better legislation that Democrats had hoped to pass by the end of the year. The policy has already cut child poverty by nearly 30%.

Manchin has also told colleagues he believes that Americans would fraudulently use the proposed paid sick leave policy, specifically saying people would feign being sick and go on hunting trips, a source familiar with his comments told HuffPost.

Misusing government assistance for drugs has been a popular talking point for Republicans for years.

During the Obama administration, conservatives across the country fought to add drug testing to requirements to food stamps, unemployment benefits and the Temporary Assistance for Needy Families (TANF) program, which provides monthly cash benefits to poor parents.

While universal drug testing for TANF was ruled unconstitutional in 2014, 13 states approved testing beneficiaries with a “reasonable suspicion” of drug misuse be tested.

Be mad at Manchin, who didn't bargain "in good faith" as he claimed. Acknowledge that progressives were right about what would happen if infrastructure passed first. But save hottest ire for 50 GOP senators who'd rather deny Biden a win than help families and save the planet.

After spending hundreds of thousands on testing more than 263,000 applicants, less than 1 percent were rejected from TANF for drugs.