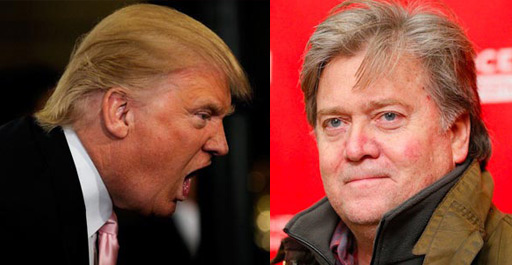 According to Foreign Policy, Donald Trump himself ordered Steve Bannon to refuse to answer questions before a House Intelligence Committee on Tuesday:

Trump acted to limit Bannon’s testimony based on legal advice provided by Uttam Dhillon, a deputy White House counsel, who concluded that the administration might have legitimate executive privilege claims to restrict testimony by Bannon and other current and former aides to the president, according to these same sources.

But Dhillon has also concluded that Bannon and other current and former Trump administration officials do not have legitimate claims to executive privilege when it comes to providing information or testimony to special counsel Robert Mueller, according to the sources.

Personally, I’m not sure executive privilege really applies to any questions from the campaign or the transition period after the election since Trump was not president yet. If you’re not the “executive,” then you have no executive privilege.

Several outlets have reported that Bannon has agreed to be open and transparent with Robert Mueller’s investigators in exchange for avoiding testimony before a grand jury.