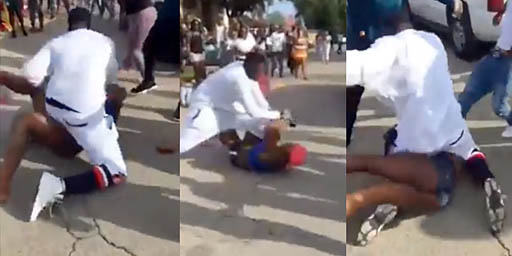 The Dallas Morning News reports that Edward Dominic Thomas, accused of brutally assaulting a transgender woman, was offered $200 to beat her.

The altercation took place between 5 and 6 p.m. on Friday at the Royal Crest Apartments in Dallas, Texas.

The victim, 23-year-old Muhlaysia Booker, told police she accidentally backed into another car in the parking lot of the apartment complex.

The driver of the vehicle, who has been named as a suspect but not yet arrested, admitted to running Booker “off the road to keep her from fleeing.”

The driver reportedly aimed a gun at Booker while demanding $200 for the vehicle damage.

As a crowd gathered, someone reportedly offered Thomas $200 to beat Booker, according to the police affidavit.


Video of Thomas viciously beating Booker went viral after being posted to Facebook.

In the video, Thomas punches the transgender woman over and over. At one point, two other men joined in kicking Booker.

Click below to watch the video. Warning – graphic violence:

The attack ended when several women picked Booker up, and transported her to UT Southwestern Medical Center where she was treated for a concussion, a fractured wrist and bruising.

Booker told the police she heard homophobic slurs during the attack.

According to the Dallas Morning News, Thomas has a record of previous convictions for family violence assault, burglary and unlawful carrying of a weapon.

Thomas was interviewed on Sunday by police, at which time he admitted to the assault but denied “saying anything derogatory.” He was charged with aggravated assault causing serious bodily injury. His bail was set at $75,000.

A spokesman for Dallas Police, Lt. Vincent Weddington, told the press authorities are looking into whether hate crime charges may apply to the incident.

“This case is certainly disturbing,” Weddington said. “The video, I’m sure, shocks the conscience of anyone who looks at this video. … This is being taken very seriously in our department.”

Mayor Mike Rawlings issued a statement about the assault via Twitter which read, “I am extremely angry about what appears to be mob violence against this woman. I am in contact with the chief and she assured me that the Dallas Police Department is fully investigating, including the possibility that this was a hate crime.”

Statement: Chief Hall alerted me this morning to the assault at the Royal Crest Apartments and I have seen a video of what happened. I am extremely angry about what appears to be mob violence against this woman. I am in contact with the chief and she… https://t.co/zlr5TN68Ic https://t.co/FvO9ALT13j