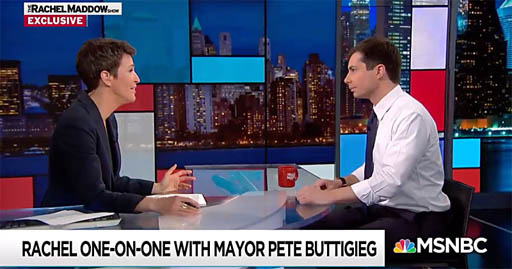 In a revealing one-on-one interview on MSNBC’s The Rachel Maddow Show, Maddow spoke with Democratic presidential contender Mayor Pete Buttigieg about a range of topics, including being closeted and coming out.

It was a particularly candid exchange as Maddow pointed out the two had both been Rhodes scholars. Even though Maddow had gone through the Rhodes scholarship process 10 years before Buttigieg, she noted that she had been the first out American Rhodes Scholar.

But Buttigieg didn’t come out until he was 33-years-old – after his college days, his Rhodes Scholar days, serving in the military and becoming mayor of South Bend, Indiana.

“I think it would have killed me to be closeted for that long,” said Maddow without coloring the statement. “Not coming out until your early 30s, I just wonder if that was hurtful to you? If it hurt you to do it?”

“It was hard,” Buttigieg replied. “It was really hard.”

“Coming out is hard, but being in the closet is harder,” Maddow pointed out. 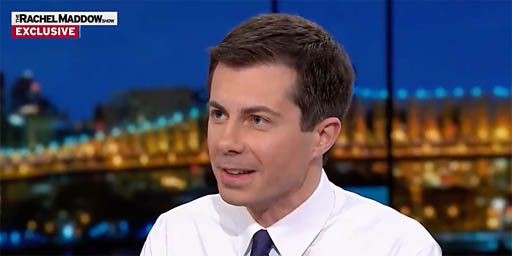 The 37-year-old mayor continued, sounding much like many people who wrestle with their closet demons.

“There were certainly plenty of indications by the time I was 15 or so that I could point back [and say] ‘yeah, this kid’s gay.’ I guess I just really needed to not be. There’s this war that breaks out inside a lot of people when they realize that they might be something they’re afraid of. It took me a very long time to resolve that.”

It was his deployment in Afghanistan that led Buttigieg to his personal epiphany.

“I realized that you only get to be one person; you don’t know how long you have on this earth,” he shared. “And by the time I came back, I realized, ‘I gotta do something.’”

That ‘something’ would be publicly coming out via an op-ed published in the South Bend Tribune in 2015 as he was running for reelection. He would go on to win in a landslide with 80% of the vote.

“One thing that gives me a lot of encouragement – don’t get me wrong, as you know there’s plenty of ugliness that comes in from all over the place – most people, I think, are either supportive or even enthusiastic about the idea of the first out person going this far,” he said. “Or, they find a way to let me know they don’t care – and that’s historic, too.”

“One day, the way this will work, when the mayor is trying to figure out how to come out, you go to the next rubber chicken you’re going to and your date’s the same sex. And that’s that,” he said. “People shrug, figure it out, and get on with the evening.”