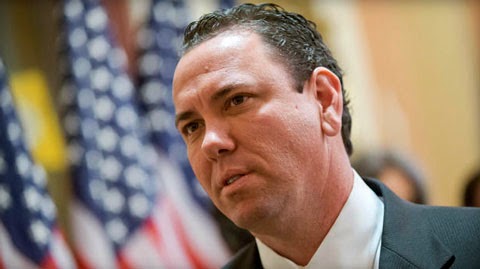 First term “Christian Values” congressman Vance McAllister is getting more pressure to step down from his congressional seat after video was made public of his “make-out session” with a now-fired staffer.

Gov. Bobby Jindal, R-La., called the congressman’s behavior an embarrassment. “Congressman McAllister says he wants privacy to work on his issues with his family. The best way to get privacy and work on putting his family back together is to resign from Congress,” Jindal said.

Meanwhile, state GOP chairman Roger Villere issued a blistering statement calling on McAllister to resign, but so far, the 40-year-old freshman congressman was rejecting the calls for him to immediately give up his seat.

“Mr. McAllister’s extreme hypocrisy is an example of why ordinary people are fed up with politics. A breach of trust of this magnitude can only be rectified by an immediate resignation,” Villere said.

“He has embarrassed our party, our state and the institution of Congress,” the chairman continued.

McAllister made his “Christian values” a central component of his campaign.

Interesting to note that GOP chairman Villere never asked for Sen. David Vitter to resign when it was discovered he had been patronizing prostitutes in 2007.