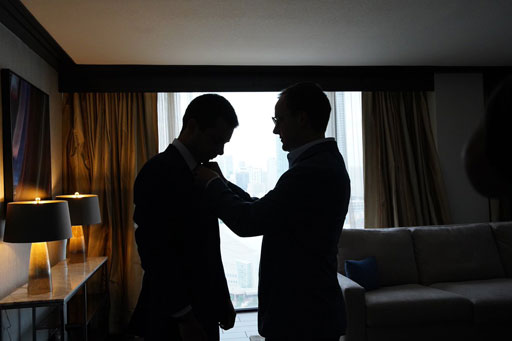 That journey would include the free-wheeling 1970s, the horror of the AIDS epidemic which galvanized our community in the 1980s, the rise of openly LGBTQ politicians in the U.S. Senate, House of Representatives, governor’s offices and state legislatures, the increased visibility in the media, the repeal of Don’t Ask/Don’t Tell, and marriage equality.

And that just scratches the surface of the beginning of our story.

It might seem like a lot in a relatively short amount of time, but for those who were there at the Stonewall Inn and since, every slur suffered, every homophobic confrontation, every Pride flag raised in solidarity, has been its own journey.

I never forget whose shoulders we stand upon today.

And also, the vast number of LGBTQ allies who stood with us on the way to here, and continue forward as we look forward.

50 years ago, history was written at the Stonewall Inn when New York's LGBT community stood up, spoke out, and started a movement. In 2016 I was proud to designate it as a national monument—a reminder the arc of our history is an arc of progress as long as we keep pushing for it. pic.twitter.com/xyvYfuoJwK

Today, we celebrate the 50th anniversary of Stonewall and the birth of the modern LGBTQ rights movement. Democrats will never stop fighting for equal rights for all. #Stonewall50 pic.twitter.com/zKlqzTOe3D

Even as we remember where we came from, it’s important to acknowledge the struggles for equality that are still with us.

• In 30 states, LGBTQ people are at risk of being fired, evicted or denied services because of who they are.

• LGBTQ youth continue to face elevated levels of bullying and rejection, and many associated physical and mental health challenges.

• According to FBI hate crimes statistics from 2017, the most recently available data, the bureau reported a surge in hate crimes disproportionately affecting LGBTQ people, Black people and religious minorities, especially those living at the intersection of multiple identities.

But, today, for a moment, we stop to remember (and maybe dance a bit).

Back in 2011, in my first blog post for The Randy Report, I shared that growing up as a kid in Texas I was “afraid of everything.”

It’s only because of the heroes of Stonewall that I somehow got on a train in April 1993, from New York City to Washington DC, alone (but not really), and took part in the Gay & Lesbian March on Washington.

That a little over ten years later, surprising no one more than me, I would walk into a Toronto courtroom and exchange actual marriage vows with my husband, Michael – before anyone in the United States could legally marry.

And, that I would find the nerve to take to this blog every single day for years to write about LGBTQ equality and more.

I’ll try to wrap this up with a tweet by Chasten Buttigieg last night before the Democratic debate where his husband, Mayor Pete Buttigieg, became the first openly gay Democratic presidential candidate to take the stage as a credible contender.

If anything sums up my personal thoughts on this incredible journey, so far, it’s this:

You’re ready, @PeteButtigieg. You’ve got this. I love you. pic.twitter.com/3eq7DZe2WT

If you had told my ten-year-old self this would ever be possible, I’d have never believed you.