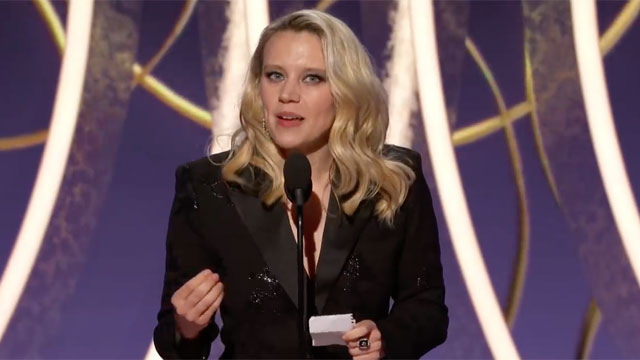 I enjoyed watching the Hollywood Foreign Press Association’s 77th annual Golden Globe Awards last night, even though I had hopes that more LGBTQ artists’ work would be recognized.

First up – the good news.

SNL’s Kate McKinnon paying tribute to Ellen DeGeneres in advance of Ellen accepting the Carol Burnett Excellence in Television Award was easily the most touching LGBTQ moment of the night.

“In 1997, when Ellen’s sitcom was in the height of its popularity, I was in my mother’s basement lifting weights in front of the mirror and thinking, ‘Am I gay?’ And I was, and I still am,” McKinnon said. “But that’s a very scary thing to suddenly know about yourself. It’s sort of like doing 23andMe and discovering that you have alien DNA. And the only thing that made it less scary was seeing Ellen on TV.”

“She risked her entire life and her entire career in order to tell the truth, and she suffered greatly for it,” continued McKinnon. “Of course, attitudes change, but only because brave people like Ellen jump into the fire to make them change.”

“And if I hadn’t seen her on TV, I would have thought, ‘I could never be on TV. They don’t let LGBTQ people on TV.’ And more than that, I would have gone on thinking that I was an alien and that I maybe didn’t even have a right to be here. So thank you, Ellen, for giving me a shot. A shot at a good life, and thank you also for the sweater with a picture of the baby goat on it.”

“It’s the first time I won an award with him. Ever,” said the pop music legend while accepting the award. “We never won a Grammy, we never did anything together except for this and I’m so happy, thank you very much.”

Taron Egerton wins Best Actor in a Motion Picture for his portrayal of Elton John in "Rocketman". #GoldenGlobes pic.twitter.com/wdFtD7wpSe

Out actors Billy Porter (FX’s Pose) and Ben Platt (Netflix’s The Politician) were nominated for Best Performance by an Actor in a Television Series in the Drama and Comedy categories, respectively. But the two Tony Award winners went home empty-handed as Porter watched Brian Cox accept the trophy in his category for HBO’s Succession, and writer/actor Ramy Youssef scored over Platt for his turn in Hulu’s Ramy.

Porter may not have won during the awards ceremony, but he certainly scored on the red carpet with his ‘vision in white’ feather-adorned tuxedo by Alex Vinash in collaboration with stylist Sam Ratelle.

Embellished with 4,000 Swarovski crystals and a six-foot train paired with a $2 million, 40-carat Tiffany & Co. diamond necklace, Porter was easily one of the fashion highlights of the evening.

Standing on the red carpet, Porter announced, “This is not a sitting outfit, this is a standing outfit!”

Out actress Beanie Feldstein received a nod for her high school overachiever in the lauded comedy Booksmart, but the moment would go to Awkwafina in The Farewell, making history as the first Asian-American performer to win a Golden Globe in any lead actress film category.

I thought Antonio Banderas would score with his nomination for Best Performance by an Actor in a Motion Picture (Drama) in Pedro Almodóvar’s Pain and Glory, but Joaquin Phoenix walked away with the Golden Globe for his terrific performance in The Joker.

Some might have been surprised by Renée Zellweger’s win for Best Performance by an Actress in a Motion Picture (Drama) in the Judy Garland biopic, Judy. But it’s a worthy, powerhouse performance in a moving film about the legendary gay icon.

Lesbian-centric Killing Eve lost in the Best Television Series (Drama) category to Succession. And Netflix’s gay-themed The Politician was nominated for Best Comedy Series, but the honor went to the Amazon hit, Fleabag.

Two queer films – Portrait of a Lady on Fire and Almodóvar’s Pain and Glory – were nominated for Best Foreign Language Film, but the award went to the widely-acclaimed South Korean thriller, Parasite.

While not LGBTQ in regards to the actors or content, I was thrilled that Michelle Williams’ incredible turn as legendary Broadway leading lady Gwen Verdon in the miniseries Fosse/Verdon scored. Months after viewing the series, I think it’s the best thing I saw on television all year.

In case you missed Michelle Williams' Golden Globes speech last night, here it is. I will also say Women-we are the largest demographic in America and if we vote in our self interest, like men do, the country will look like us.

Then everyone will win. pic.twitter.com/wc8MhUDBmy