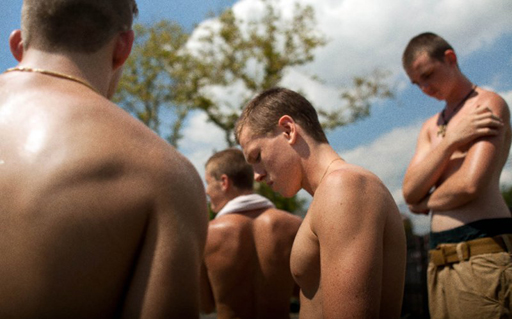 I’ll be curious to see if Barry Jenkins’ Oscar winning Moonlight might open the door for more queer-themed indie films.

The film I have in mind right now is Eliza Hittman’s new flick, Beach Rats, which just dropped a full-length trailer.

On the outskirts of Brooklyn, Frankie, an aimless teenager, suffocates under the oppressive glare cast by his family and a toxic group of delinquent friends.

Struggling with his own identity, Frankie begins to scour hookup sites for older men. When his chatting and webcamming intensify, he begins meeting men at a nearby cruising beach while simultaneously entering into a cautious relationship with a young woman.

As Frankie struggles to reconcile his competing desires, his decisions leave him hurtling toward irreparable consequences.

Eliza Hittman won at Sundance for her direction this year; and the film also won at the Montclair Film Festival and the Independent Film Festival of Boston.

Critics have called the film a powerful character study that is as visually stunning as it is evocative.

The film brews a potent cocktail of bristling male aggression and inarticulate sexual longing mixed with fear, as Frankie’s burgeoning identity becomes irreconcilably distant from his native habitat. That makes for a tense and unsettling final section, with a conclusion that leaves Frankie reeling at an ambiguous crossroads.

English actor Dickinson stands to make a significant leap on the casting radar with his work here, playing a character floating through his impulsive sexual exploration, seemingly in total denial that any of it involves conscious choices. It’s a characterization that might easily have read as weak, unfeeling, even remote, and yet despite the refusal of both actor and filmmaker to signal Frankie’s vulnerability, his lost quality keeps us in a melancholy grip.

In select theaters August 25th. Watch the trailer below.