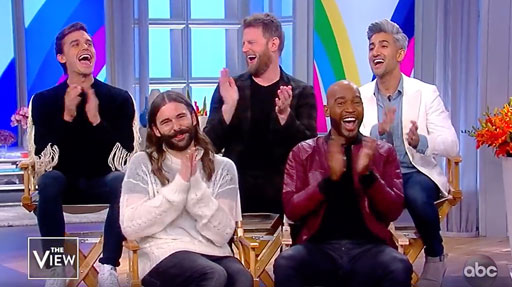 The men of Netflix’s Queer Eye joined the ladies of The View to chat on the impact the Emmy Award-winning show has had on the country, especially in rural America where the show has been filming some episodes.

Design guy Bobby Berk shared about a message he received privately on social media from a preacher who feels differently about gays having watched Berk share his story of growing up in the church and feeling unwanted there.

“My whole life I was taught in church that homosexuality is a sin, that they’re pedophiles, that they’re heathens, that they’re definitely going to hell and that they choose to be that way and in turn my church I have preached the exact same way.

And hearing you talk about how every single day of your life you cried and you begged and you pleaded and you prayed for God not to make you gay but you still are showed me that it isn’t a choice and that you were born that way and I’ll never preach that way in my church again.’”

“To hear that now little kids in that church aren’t going to grow up and be taught to hate who they are, that’s worth everything.”

“I threw the hat away,” admitted Karamo. “But ironically, that guy and I, we are best friends.”

“For five gay guys to go into rural America and feel as if we’re making a change, it feels really good,” he continued. “We can’t expect people to grow until we show them who we are.”

Newly-engaged Karamo also admits to be something of a ‘Bride-zilla” having just rented a ferris wheel for the upcoming nuptials.

Tan France, who now lives in Salt Lake City with his husband, shared that he knew most of America had never seen ‘this’ – a gay Muslim – but the reaction he’s received has been “the most beautifully warm welcome” he ever could have imagined.

An interesting exchange happened when Behar asked food expert Antoni Porowski his thoughts on the same-sex kiss that ended a number from Broadway’s The Prom on last week on the Macy’s Thanksgiving Day Parade.

Porowski offered a tentative, “I think it’s a reminder that the rest of the country is not New York and we need to remember that.”

But grooming guy Jonathan Van Ness seems to be a bit fatigued with waiting for folks to feel the gay love.

“I’ve had to endure a lot of heterosexual kissing in my lifetime,” Van Ness added.