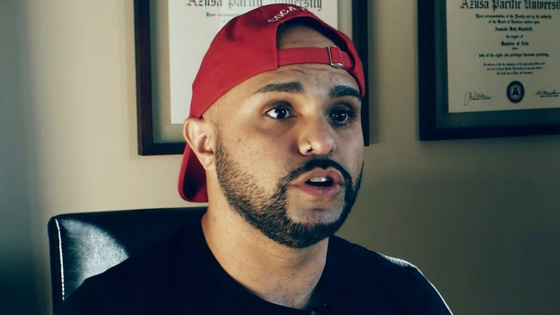 Over the weekend, two survivors of the deadly Pulse Nightclub shooting in Orlando, Florida, hosted a rally promising ‘deliverance to the LGBTQ community through religion.’

According to the Orlando Sentinel, tens of people gathered at the rainbow amphitheater at Lake Eola Park. Members of the group Changed Movement told the attendees that they have “chosen identity in Christ” over being homosexual.

The rally, which was staged much like a religious service, included testimonials from members who say they left the LGBTQ ‘lifestyle’ after finding religion.

Among them were Luis Javier Ruiz, 36, (above) and Angel Colon, 29, who survived the Pulse massacre on June 12, 2016, which left 49 dead and 53 more injured. Since the deadly shooting, the two say they have become heterosexual through religion.

After healing from their injuries, the two founded Fearless Identity, a religious ministry which, according to the official website, promises to bring “hope and understanding to the LGBTQ community and the church through education, biblical clarity, and support in a judgement free environment for those seeking the option to change.”

The duo promise, however, that the ‘option to change’ is not about so-called conversion therapy.

“This is all the Holy Spirit, this is the man that died on the cross,” he continued. “This man never cheated on me, never slept with my best friend. He’s the man on the cross.”

I walked by the freedom march today in Orlando, basically an anti-lgbt rally. I just wanted to walk around the lake with my boyfriend only to be reminded that Orlando isn’t safe from gross hatred towards my community pic.twitter.com/ro5Rkyz053

Far from a “Freedom March”, the Religious Right exploited desperate and vulnerable LGBT people to hold a “Fraud March” in Orlando, where these folks renounced their humanity to get a pat on the back from homophobic bigots. Fortunately, the Truth Wins Out.https://t.co/WPgRWTxD5b

Prior to the so-called ‘Freedom March,’ LGBTQ advocates in Orange County called for a statewide ban on conversion therapy.

Brandon Wolf, another survivor of the Pulse Nightclub shooting and an LGBTQ advocate, attended a county commission meeting last week asking his local leaders to “take a stand against conversion therapy.”

And Wayne Besen, of Truth Wins Out, which works to expose conversion therapy and the ‘ex-gay myth,’ interviewed Orlando City Commissioner Patty Sheehan who shared her own painful experience with conversion therapy.

“I knew I was attracted to women, but I thought I could pray the gay away,” said Sheehan, the first openly gay elected official in central Florida.

Sheehan told Besen that, as a teen, she attended a church that promoted ‘ex-gay’ therapy

During meetings with the group, Sheehan was promised that an orange mucous was going to “emanate from me as the demon of homosexuality left my body.”

Sheehan told Truth Wins Out her message to people considering taking part in an ‘ex-gay’ ministry program is to “get some counseling outside of the church and really get a handle on where you are at, because I think they will take advantage of you, they will make you dependent and they will not do what’s in your best interest.”