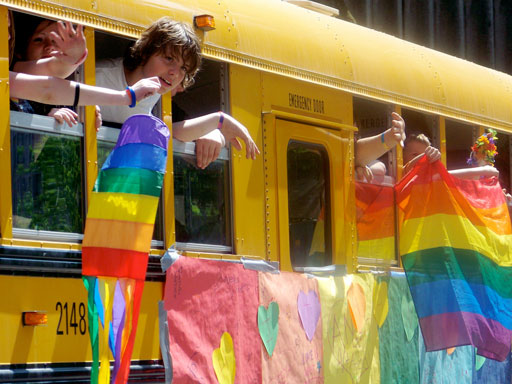 According to the 2017 National School Climate Survey from GLSEN (Gay, Lesbian & Straight Education Network), progress in making schools more inclusive and less hostile for LGBTQ students has slowed down after years of improvement.

The average age of participants was 15.6 years-old and four in ten of those surveyed identified as gay or lesbian.

The results of the survey showed that after years of declining harassment, the improving climate seems to have plateaued (see graphic below). 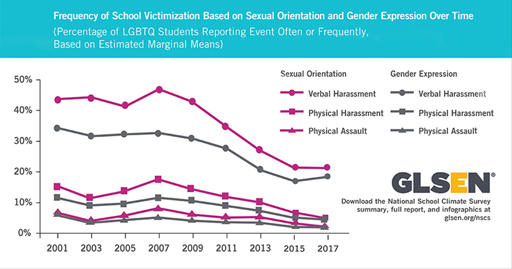 The data from the survey shows:

• 98.5% of LGBTQ students have heard the term “gay” used in a negative way; 70% say they hear these remarks frequently

• Almost 30% say they’ve been physically harassed (pushed, shoved) based on sexual orientation; 24.4% based on gender expression

• 12.4% of LGBTQ students say they’ve been physically assaulted (punched, kicked) based on sexual orientation; 11.2% based on gender expression

• 42.2% of LGBTQ students say they considered dropping out of school due to harassment

• 48.7% of LGBTQ students have experienced cyberbullying in the past year

• 57.3% of LGBTQ students reported being sexually harassed in the past year at school

The majority of LGBTQ students (55.3%) who were victimized in school did not report the incident believing no effective intervention would happen or the situation could become worse.

Of the students who did report an incident, 60.4% say school staff did nothing or told the student to ignore it.

One piece of good news: more students reported having a Gay/Straight Alliance (53.3%) at their school than ever before.

Head over to GLSEN to read the full report.