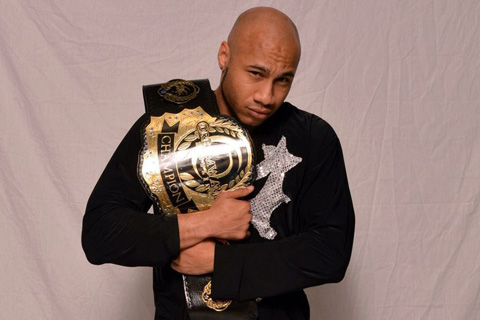 Pro wrestler Matt Hullum, (performs under the stage name “Money” Matt Cage), has come out as gay in a Facebook post titled “Here goes nothing.”

At this writing the post has received over 355 Likes and over 140 comments – the vast majority of which are supportive.

One of the biggest fears in my life has been rejection. I’m not sure why. I was never the most popular kid in school or in my neighborhood, but I always had a plethora of friends in many different cliques. I was never really rejected by anyone that I hung out with in one clique for hanging out with people in another, yet I always feared being rejected. But as I’ve grown older and continued down the road of adulthood, I have discovered that I truly don’t care as much about rejection anymore. And I why should I? My friends will like me for me, flaws and all. My family will love me for me. My peers will respect me for my work. And complete strangers can think whatever they want, because they’re strangers and they don’t know me.

That being said, it makes it much easier to post here publicly that I’m gay.

For the longest time, I claimed that I was bisexual. When I privately came out to people that already know, I told them that this was the case. And it was. However, I have no real intentions of pursuing females at this stage of my life. I still find beautiful women beautiful. I don’t think that’ll ever change. But I think that to continue to claim something that’s not true is just continuing a streak dishonesty and I don’t want that. Sorry, ladies. I’m officially pulling myself off of the market. Don’t hate me too bad.

To many of my closest friends, they’ve known since the tail end of 2013 when I began the process of telling the people who I felt should know. Some of them “knew” for much longer due to their own assumptions or beliefs. My parents know and they support me. That should be enough, honestly. But still, the speculation that comes from one’s private life always seems to make it’s way into the professional atmosphere and that’s unfair to me. I truly have nothing to hide anymore. I spent the majority of my life lying, hiding and depressed because I felt like I couldn’t truly be who I wanted to be and live freely as I saw fit. I had to act and that’s not me. I, nor anyone else, should have to do that.

As mentioned, the vast majority of the comments (including those from fellow pro-wrestlers) have been positive.