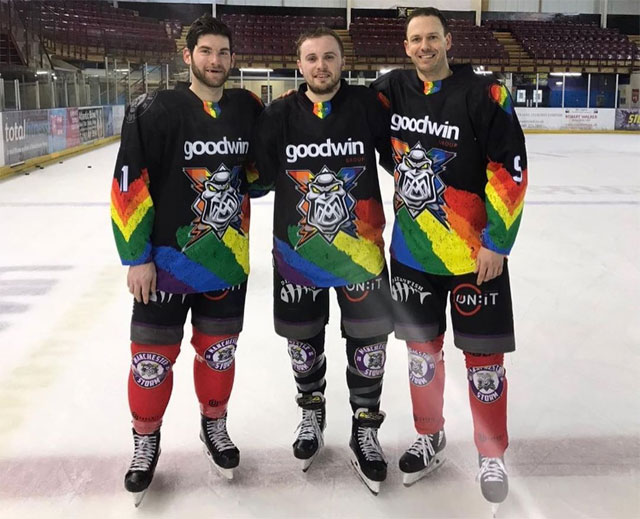 Professional ice hockey player Zach Sullivan of the Manchester Storm came out as bisexual this weekend.

As the Elite Ice Hockey League held its first official Pride weekend promoting diversity and inclusivity in the sport, Sullivan took to his social media to share his message.

“I have battled with mental health problems over this issue and with the support, understanding and acceptance from my family, friends and teammates, I finally feel ready to say: I’m bisexual,” wrote the 25-year-old athlete.

He added he has “never been more proud to wear a jersey before, especially one that celebrates all gender identities and sexualities.”

The responses on social media were overwhelmingly positive. Not only from his fans, but his team, the Elite Ice Hockey League, and more.

Ryan Finnerty, head coach for the Manchester Storm, tweeted his support writing, “His strength and courage will inspire the youth of tomorrow.”

As a Coach and Organisation we could not be more proud of @ZachSully11 today. His strength & courage will inspire the youth of tomorrow. #ifyoucanplayyoucanplay https://t.co/BDqnTtH9gD

We are all extremely proud of you, Zach! You're a role model for so many people, young and old, in the sporting world. Someone knowing they can be themselves is a true testament to everything our club and sport stand for.#WeAreStorm | #Manchester | #Pride https://t.co/x4UuWXzo7M

Proud of you mate, good for you. Really goes to show hockey is for everyone 🏳️‍🌈 #PrideWeekend https://t.co/lTA2KCi4p1

Super proud of you, Zach! 🤗

Sullivan told the BBC’s Radio Manchester that while his sport is hyper-masculine he realized he had “quite the opportunity with it being the first-ever EIHL Pride weekend.”

Congrats, Zach, on living out loud!

'It's taken me a long time, but I'm now at a position in my life where I am comfortable with who I am.'@Mcr_Storm's @ZachSully11 talks he decision to come out as bisexual and why he hopes he can be an inspiration to others.