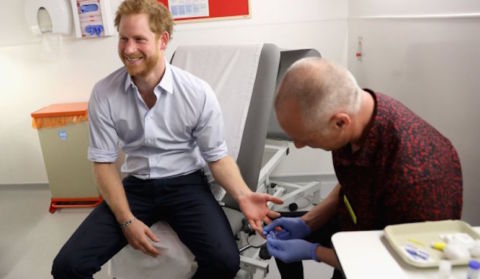 Handsome Prince Harry, in an effort to raise awareness about knowing your HIV status, took an HIV test via livestream which was shown on the British royal family’s Facebook page.

With over 100,000 people living in with HIV in the UK, the 31 year old ginger has made raising awareness about HIV status a focus of his public work.

“It is amazing how quick it is,” the 31-year-old Harry said during his appointment at a London hospital. The famously red-headed royal added: “So whether you’re a man, woman, gay, straight, black or white — even ginger — why wouldn’t you come an have a test?”

The video hearkened back to groundbreaking images of Harry’s late mother, Princess Diana, reaching out to people with HIV in the 1980s. Diana’s gestures — including a photograph of her shaking hands with an HIV-positive man and hugging children with AIDS — went a long way toward removing the stigma around it.