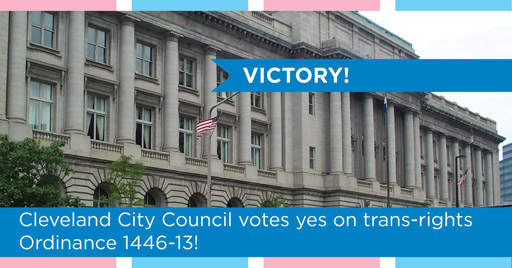 By a unanimous vote, the Cleveland City Council has passed Ordinance 1446 — a measure which protects the rights of transgender citizens to use the restrooms and facilities that align with their gender identity.

While a 2009 law granted trans protections in employment and public accommodations, until today transgender people have continued to face legal discrimination in access to single-sex facilities such as locker rooms and restrooms.

Today’s pro-equality vote comes just days ahead of the 2016 Republican National Convention, which is being held in Cleveland. A slew of anti-LGBTQ provisions have been proposed this week by the party’s policy subcommittee, including a provision supporting anti-transgender discrimination, a provision calling for a Constitutional amendment undermining marriage equality, and another supporting the discredited and dangerous practice of so-called “conversion therapy.”

Cleveland now joins 19 states and more than 100 cities that have explicit non-discrimination protections on the basis of sexual orientation and gender identity in public accommodations, housing and employment. Columbus and Cincinnati also have similar protections in place.