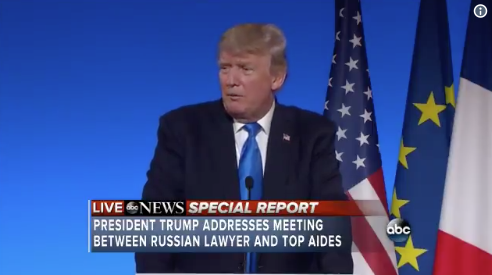 At a press conference in Paris today with French President Emmanuel Macron, President Trump defended his son, Donald Trump Jr., for taking a meeting last June with what he expected to be a “Russian government attorney” who said she had dirt on Hillary Clinton from the Russian government.

President Trump says meetings with foreign nationals who offer to help in a campaign “standard.”

“My son is a wonderful young man. He took a meeting with a Russian lawyer. Not a government lawyer, but a Russian lawyer. It was a short meeting. It was a meeting that went very, very quickly; went very fast. Two other people were in the room. I guess one of them left almost immediately. And the other one was not really focused on the meeting.

“I do think from a practical standpoint most people would have taken that meeting. It’s called opposition research, or even research into your opponent. I’ve only been in politics for two years and I’ve had many people call up and say “Oh gee, we have information on this factor or this person. Or, frankly, Hillary. That’s very standard in politics. Politics is not the nicest business in the world, but it’s very standard where they have the information and you take the information.”

It’s actually against the law for a campaign to accept anything of value (including information on your political opponent) from a foreign national.

By the way, if you watch below, catch how Trump tries to blame former Attorney General Loretta Lynch for Don Jr’s decision to meet with the Russian goverment lawyer.

In related news, senators from both the Senate Judiciary and Intelligence committees are asking Don Jr. to testify under oath about the June 9th meeting.

Watch Trump answer the question below.

Pres. Trump on Trump Jr.: “I think from a practical standpoint most people would have taken that meeting. It’s called opposition research.” pic.twitter.com/PVVadNtzWD