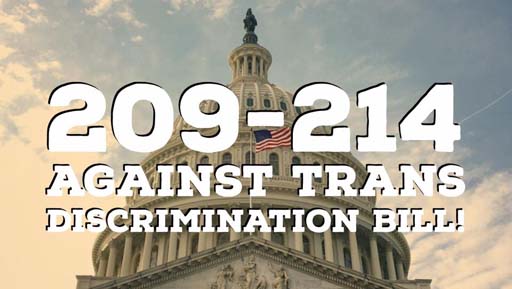 The U.S. House of Representatives voted down an amendment today that would have ripped away critical health care for transgender service members and military dependents.

Proposed by virulently anti-LGBT Rep. Vicky Hartzler (R-MO), the amendment would have barred access to transition-related health care — including critically important care such as hormone therapy — for service members and military family members.

“Congresswoman Hartzler’s attempt to strip healthcare from service members and their families in a time of war was unpatriotic, unconstitutional, and just plain vile, we are pleased to see that the House of Representatives voted down this amendment” said OutServe-SLDN Executive Director Matt Thorn.