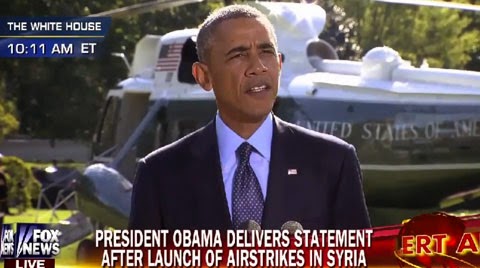 President Obama spoke to the nation today after a coalition of Arab allies joined the US in strategic airstrikes against ISIS in Syria last night.

The President’s comments precede his trip to NYC where he will ask the United Nations General Assembly for more support in the anti-ISIS campaign.

“America’s proud to stand shoulder-to-shoulder with these nations on behalf of our common security,” the president said. “The strength of this coalition makes it clear to the world that this is not America’s fight alone.”

He reiterated that support for moderate opposition forces in Syria, who are fighting both ISIS and the regime of President Bashar Assad, is the “best counterweight” against the militants.

“The overall effort will take time,” Obama said. “There will be challenges ahead, but we’re going to do what’s necessary to take the fight to this terrorist group for the security of the country, the region and the entire world.”

Besides hitting ISIS targets, the United States, acting alone, struck training camps and other facilities belonging to a little-known network of seasoned al Qaeda veterans known as the Khorasan Group. Obama said that those strikes demonstrate to the world that “we will not tolerate safe havens for terrorists who threaten our people.”

He thanked the pilots who flew the missions “with the courage and professionalism that we’ve come to expect from the finest military that the world has ever known.”