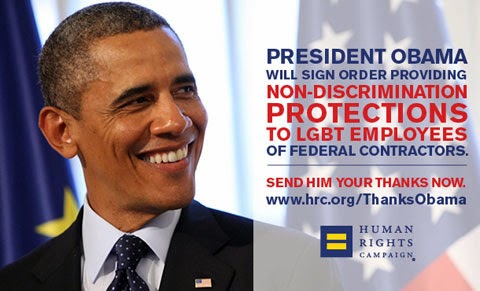 “This is a major step forward in the struggle for freedom and justice for LGBTQ workers and their families. Now millions of people will have the economic security they need to provide for their families.

“Through his actions, the President has demonstrated again his commitment to ending discrimination. We thank all the organizations who have worked so hard to make this piece of history. This decision is good for LGBTQ people, good for our economy and good for America.

“Unfortunately, many of us who don’t work for federal contractors will still lack workplace protections. Now we must redouble our efforts for the urgent passage of state employment protections and strong federal legislation.”

From Chris Geidner at Buzzfeed:

The Obama administration has maintained in the past that the Employment Non-Discrimination Act (ENDA) is its preferred path for LGBT workplace protections, but Monday’s announcement signals an acknowledgement that, despite Senate passage last fall, the bill is not likely to move in the House this year.

The executive order will prohibit companies that contract with the federal government from discriminating in employment based on sexual orientation and gender identity. Federal contractors employ more than 20 percent of the American workforce – 28 million workers — and collect around $500 billion in federal contracts every year. According to the Williams Institute, an executive order would protect 11 million more American workers from discrimination based on sexual orientation and up to 16.5 million more workers based on gender identity.

Notably, the proposed executive order will require Exxon Mobil Corporation, a top federal contractor that draws hundreds of millions annually in federal contracts, to provide non-discrimination protections to its LGBT employees and prospective hires. Yet ExxonMobil has consistently resisted these kinds of protections. Earlier this month, ExxonMobil’s shareholders voted for the 17th time to reject a policy that would prohibit discrimination against LGBT workers.