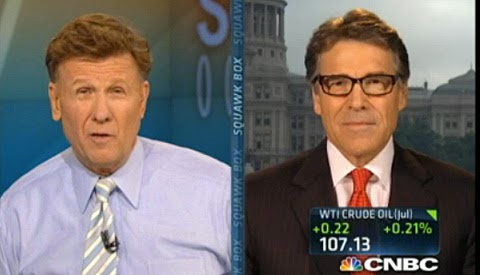 CNBC Squawk Box host Joe Kernan called Texas Governor Rick Perry on his remarks comparing homosexuality to alcoholism in a segment that aired Monday morning. Here’s just a bit of what went on.

“In terms of comparing it to alcoholism, that’s what got all the play, and i don’t — I have a really high bar for what I would take offense to, but that would exceed the bar for me on being an offensive comment. I don’t think gay marriage leads to cirrhosis of the liver or domestic violence or DWIs. I don’t see how that’s similar.”

Perry tried to spin his comments as an issue of “states right,” but Kernan was clearly not going to let the governor get off so easily:

At one point when Perry says that the issue of homosexuality should be left “to the psychologists and the doctors,” Kernan jumps in:

“The psychologists they’ve already weighed in. they’ve dismissed the idea that sexual orientation is a mental disorder and they’ve told their mental health professionals to avoid telling clients that you can change your sexual orientation…”

Near the end of the interview segment, Kernan says:

“It just seems like the Republican Party is going to be forever behind the curve on this issue.”

I can’t express how I appreciate a journalist holding a politician responsible for something they said. Rick Perry said these things, and Joe Kernan held him to it and asked for answers.