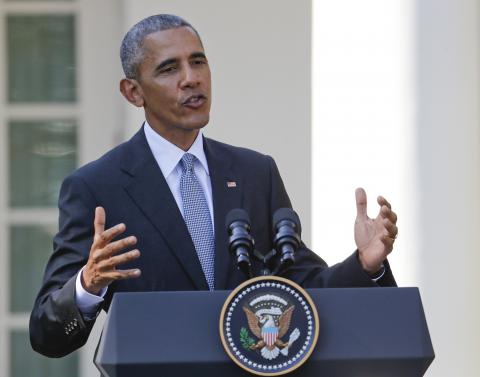 President Obama had a “mic drop” moment today during a press conference at the White House when asked about Donald Trump’s “rigged election” comments.

Obama suggested that Trump’s “whining” indicates he doesn’t “have what it takes” to be president.

“I have never seen in my lifetime or in modern political history any presidential candidate trying to discredit the elections and the election process before votes have even taken place. It’s unprecedented. It happens to be based on no facts,” the president said during a joint news conference at the White House with Italian Prime Minister Matteo Renzi.

“If you start whining before the game’s even over? If whenever things are going badly for you and you lose, you start blaming somebody else, then you don’t have what it takes to be in this job,” the president said, pointing towards the Oval Office behind him. “I’d advise Mr. Trump to stop whining and go try to make his case to get votes.” The president added that if Trump does end up winning the election, he would welcome him as the next president.

“If he got the most votes then it would be my expectation of Hillary Clinton to offer a gracious concession speech and pledge to work with him in order to make sure the American people benefit from an American government, and it would be my job to welcome Mr. Trump, regardless of what he said about me or my differences with him on my opinions and escort him over to the capitol in which there would be a peaceful transfer of power,” Obama said.

Obama: “Whining” about voter fraud before the election “doesn’t show the kind of leadership you want in a president” https://t.co/y9MN7UrexY