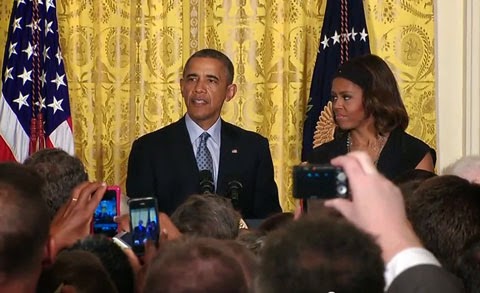 Today, as President and Michelle Obama welcomed notable LGBT media figures to the White House to celebrate Pride Month, the President surprised many during his remarks by announcing a NEW executive order banning discrimination by federal contractors on the basis of not only sexual orientation, but gender identity as well.

See below from White House transcript:

“We’ve still got a little more work to do. I’ve repeatedly called on Congress to pass the Employment Non-Discrimination Act. Right now, there are more states that let same-sex couples get married than there are states who prohibit discrimination against their LGBT workers. We have laws that say Americans can’t be fired on the basis of the color of their skin or their religion, or because they have a disability. But every day, millions of Americans go to work worried that they could lose their job -– not because of anything they’ve done — (baby cries) — I know, it’s terrible — (laughter) — but because of who they are. It’s upsetting. It is wrong.

“The majority of Fortune 500 companies already have nondiscrimination policies to protect their employees because it’s the right thing to do and because many say it helps to retain and attract the best talent. And I agree. So if Congress won’t act, I will. I have directed my staff to prepare an executive order for my signature that prohibits discrimination by federal contractors on the basis of sexual orientation and gender identity. (Applause.)

“And I’ve asked my staff to prepare a second executive order so that federal employees –- who are already protected on the basis of sexual orientation –- will now formally be protected from discrimination based on gender identity as well. (Applause.)

“So we’ve got a lot to be proud of, but obviously we can’t grow complacent. We’ve got to defend the progress that we’ve made. We’ve got to keep on reaching out to LGBT Americans who are vulnerable and alone, and need our support –- whether it’s teenagers in rough situations to seniors who are struggling to find housing and care. (Baby cries.) I know, it’s tough. (Laughter.)”

You can watch his speech in the video below. You may need to move to the 15:00 mark.