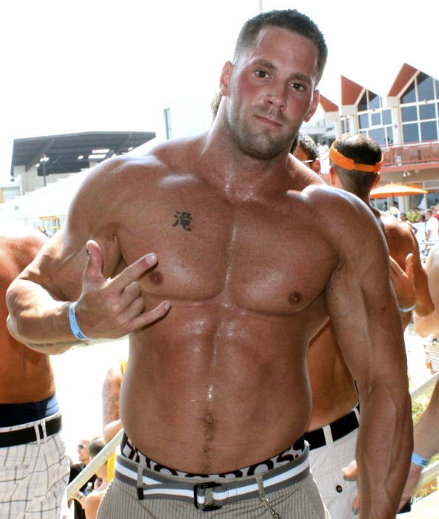 I didn’t know of Rhodes until today but I moved by the sadness of his story.

Rhodes was a prolific blogger and frequently wrote of his heavy usage of both club drugs and bodybuilding steroids.

Reading through Rhodes’ blog, you can see that he had been in a dark place for a long time. To say his posts were “troubled” would be a huge understatement.

He wrote frequently about his heavy usage of both club drugs and bodybuilding steriods: “I’m waiting until i pop. Or my liver to fails… which every comes
first.”—posting negative emails from readers and seemingly openly
courting death with statements and images.

For the first couple months, really up until last week, after my break-up, (which i’m sick talking about) but my strange lifestyle right now seems to be a direct result of it, well, anyways i was abusing Meth… and i mean hard… and since i’m not small boy and i wanna feel my high… i was shooting up syringes full of the shit… .8 – .9… ask any meth head and they get retarded off .3… but i got myself to the point where if my high didn’t feel like a partial seizure i wasn’t happy with it.

But it was fucking up my body and my brain… so much so that i was placed in Bellevue under 72 hour observation because i was considered a threat to myself and others… police escort, the whole 9 yards…

Bellevue psychiatric is more like a homeless shelter… i thought it was kinda funny when my bed just happened to be next to the weird guy with a tattoo on his face i see everyday when i buy my fat ass fast food at the Burger King across from Port Authority. I befriend him of course, in a “we are both crazy” non-verbal way… now when i see him i buy him something to eat… i feel like we have some sort of bond…well, maybe not for him…

I mean it was miserable experience but a good in a way because it let me sleep… which was long overdue at that point. I do admit it made me uncomfortable that i felt so comfortable there… But after 48 hours, i did start to feel crazy and tried to convince them to release me… Imagine cornering a psychiatric doctor and telling her “listen i’m not crazy”. The look on her face was priceless… it read… “holy shit, the roided out one crashing on meth is gonna kill me”. Once i could see she was scared, i stood aside and realized that i’m sure everyone of these crazy fucks have probably at one point or another told her the same thing and it was useless getting pissed and talking my way out them holding me… i was just gonna have to ride it out.

Finally, maybe 70 hours in, i met with a doctor who was gonna be in charge of my release … he basically asked me all questions that i have answered in explicit detail on here… of course without joking about hurting myself or others, which i tend to regularly do… and at the end of it… he says to me “Well James, i don’t think we are going to be able to release you unless we can get someone to collaborate this story”… He didn’t believe me…

He thought my fucked up life was me play make believe, funny. I relaized he was just sitting there trying to build a case about how crazy i was… he thought the more i talked the more i was digging my grave.

Since i don’t have many close people in my life, he said he would only consider a release if he talked to my twin brother… which in my eyes was the last option… nothing upsets me more then upsetting my brother. .I know he’s waiting, afraid to get the phone call that i’m dead, i know each time he get a call that i’m in the hospital, his heart sinks in his chests. Anyways, i realized the only other person that he could call would be my ex and given our recent nasty break up, along with paranoia i was convince he would be happy to have me locked away there so my only option was to give him my brother number…

When the Doctor came back in the room, after getting a hold of my brother, the look on his face changed… the stone face he had sat with, for hours grilling me was now replaced by one that just said to me that said he felt sorry for me, he walked to my side and put his hand on my shoulder and said “Its okay, we are gonna help you”… I started to cry.

I claim crashing off meth for getting all emotional… i guess i never saw that type change in person… i wasn’t sure how to handle it. I hope to never have to experience that again.

Anyways, now thanks to a mandated psychiatric appointment once a week, i’m kinda forced into keeping it clean… well enough within reason that i can pull it together to see this woman.