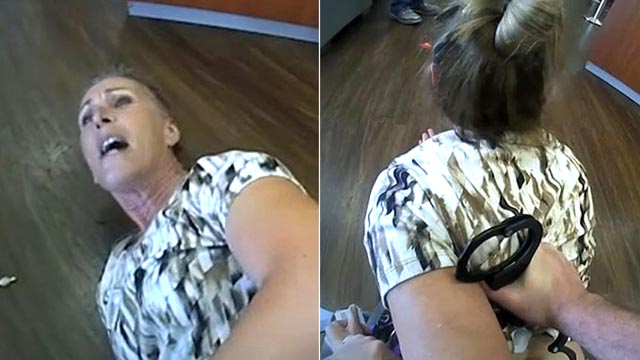 OMG, the police were called to deal with this woman a second time in just under a week.

Terry Lynn Wright, 65, was taken into custody on Wednesday by police officers at a Texas City Office Depot when she refused to wear a face mask per the company’s policy.

A mere six days prior, she was arrested on criminal trespass and resisting charges in a viral video moment at a bank in Galveston, Texas. In body cam footage, Wright was seen resisting arrest and screaming she didn’t have to wear a “face diaper.” She later told local news reporters that the pandemic is a hoax.

In the video clip, she calls her treatment ‘police brutality,’ as others in the bank lobby say, “No, it’s not.”

Police were called to the Office Depot in Texas City just after 9 a.m. on Wednesday after Wright was asked to leave the store by employees for refusing to wear a face mask. No new charges were filed, but Wright was taken into custody on warrants related to the Galveston incident. She was then transferred to the Galveston County Jail.

Lord, what do these people think they are going to achieve with these silly antics? Is all this really worth being detained/arrested?

Terry Lynn Wright’s arrest earlier this month was caught on camera. Now she’s accused of refusing to leave a Texas City Office Depot after refusing to wear a mask.​ https://t.co/uaQM5fEJzV