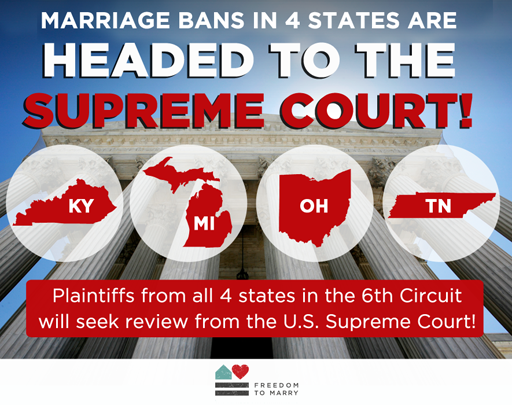 According to Buzzfeed’s Chris Geidner, all sets of plaintiffs from yesterday’s 6th Circuit ruling upholding bans on same-sex marriage have conferenced and the decision is to unanimously head to the US Supreme Court.

Abby Rubenfeld, the lead lawyer for the Tennessee plaintiffs, updated BuzzFeed News about Friday’s call with the counsel from all four states.

“We just had a conference call with the attorneys from all four Sixth Circuit states on the marriage cases. We were all in agreement to apply for certiorari at the supreme court, and not to first seek en banc review in the Sixth Circuit,” she explained. “Given the significance of the issue, the reality that it will end up in the Supreme Court ultimately, and the harms that all of our clients are suffering each day that their marriages are not recognized, we want to get to the Supreme Court sooner rather than later.”

“We hope to file within two weeks, and hopefully sooner, so that we can still be on the docket for this term—which means resolution by june 30, 2015,” she added.