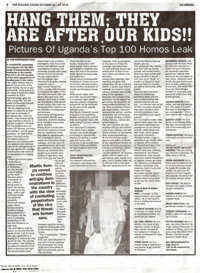 This week, conservative lawmakers in the Ugandan parliament could pass a bill that would make being lesbian, gay, bisexual or transgender a crime that is punishable by death.

This gruesome legislation would strengthen an already brutal Ugandan criminal law against homosexuality by introducing the death penalty for “serial offenders.” People suspected of homosexual activity or individuals found to be HIV-positive could be tried and executed under the law.

The lives of hundreds of thousands of Ugandans are at stake. We must take action right now.