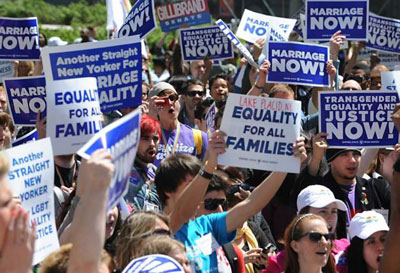 An estimated 1,000 gay-rights advocates rallied at the New York state capitol in Albany on Monday, hoping to convince the Republican-controlled Senate to legalize same-sex marriage this year.

The lieutenant governor said elected officials have a responsibility not just for what they personally believe in but for all the people they represent, “and we cannot represent all New Yorkers if we are closing the door on something so important.”

Now these are people speaking my language.  As many of you who read this blog know, I feel when civil rights are derived from a civil marriage license issued by a civil government, we are talking about civil rights.

Cuomo is viewed favorably by over 70 percent of New Yorkers and will begin a statewide tour Tuesday to build support for it and other agenda items.
(vis LGBTQnation.com)