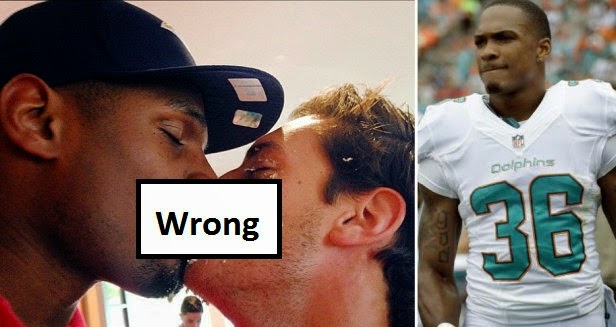 Anti-gay Peter LaBarbera, attacks Fox News for running a story about Miami Dolphins getting in trouble for saying negative things about Michael Sam kissing his boyfriend after being drafted.  Apparently the story was “one-sided” and didn’t blame Michael Sam for something:

“Don Jones had no reason to apologize. Defending historic Judeo-Christian morality and being horrified by sinful, perverse acts like same-sex kissing in public is not ‘hate’ or ‘bigotry.’ It’s called being normal.

“Please pray for this lost soul, Michael Sam, who could lead many young men astray by popularizing a grievous sin. It is tragic that the establishment power structure–media, Hollywood, academia, the corporate world–now reward those who embrace homosexuality, and punish those who oppose it. The very opposite of anti-sodomy laws, huh? Yes, America is now, morally speaking, an upside-down culture–descending willy-nilly into godlessness and sexual/gender chaos. But no civilization that glories in sexual immorality will survive in the long run.”

Seriously. Michael Sam realizes his life-long dream and in the moment turns to the love of his life and… shakes his hand? Is that what Peter LaBarbera would expect?

It’s a kiss. People in love kiss. Get over it, Peter.