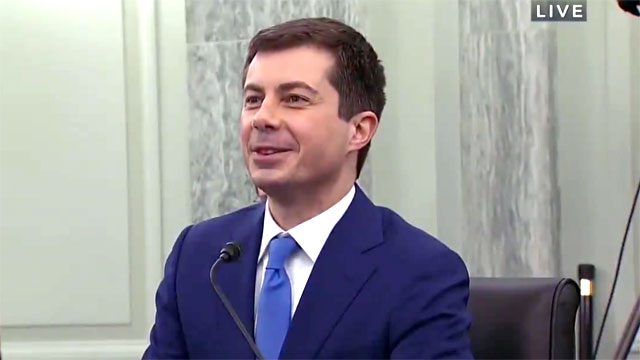 The Senate Commerce Committee today approved the nomination of Pete Buttigieg for Transportation Secretary by a vote of 21-3.

The nomination now goes to a vote by the full Senate.

As I wrote last week, his 2.5 hour confirmation hearing went VERY well. It’s a pretty sure bet Pete will be on Transportation duty very soon.

If confirmed, Buttigieg will be the first openly gay man confirmed by the Senate to a Cabinet post. He’ll also be the youngest person to lead the Transportation Department.

Thank you to the members of the @SenateCommerce Committee for their vote of confidence in me today. I look forward to working with @SenatorWicker, @SenatorCantwell, and the rest of the committee as we get to work on infrastructure and building our economy back better.

Transportation Secretary nominee Pete Buttigieg introduces his husband, Chasten, during his opening statement at confirmation hearing: "I want to thank him for his many sacrifices and his support in making it possible for me to pursue public service." https://t.co/nwOs3y6Mqw pic.twitter.com/ZN1qVGy5BN