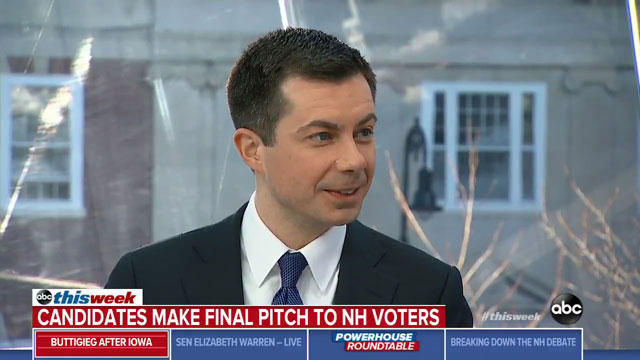 As the Democratic presidential candidates look to Tuesday’s primary in New Hampshire, former Mayor Pete Buttigieg and former Vice President Joe Biden continue to spar in their fight for the moderate lane of the Democrats.

Biden, who came in a distant 4th place in Iowa, told Biden ABC News Chief Anchor George Stephanopoulos, “I’m saying he hasn’t been able to unify the black community — that’s what I’m saying,” while underscoring his support and endorsements from several black leaders.

Responding to Biden’s assertion that he’s “no Barack Obama,” Buttigieg agreed in an interview with Stephanopoulos following Biden.

“This election is about where our county’s headed next and of course how to defeat Donald Trump,” Buttigieg continued.

“What I’m offering right now, and the reason I think we have been able to succeed so far, is a message that is about building the sense of belonging and pulling together a coalition, a majority, that will not only defeat Donald Trump, but do it by a big enough margin that we send ‘Trumpism’ into the history books,” he added.

"He's right, I'm not Barack Obama, and neither is he. Neither is anyone running for president right now. And this isn't 2008, it's 2020." https://t.co/MhLkKSqRz9 pic.twitter.com/iERhe30ZOD