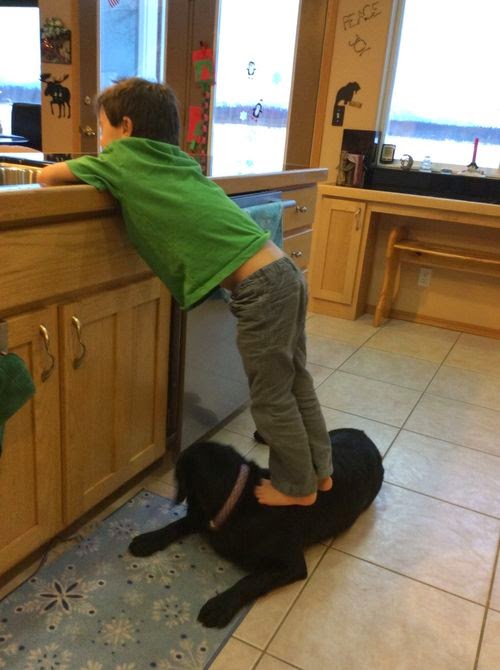 So, earlier this week Sarah Palin, former-half term governor of Alaska, posted the above photo of her child Trig, praising his ability to problem-solve and overcome roadblocks – i.e. reach the kitchen sink by standing on the family dog.

May 2015 see every stumbling block turned into a stepping stone on the path forward. Trig just reminded me. He, determined to help wash dishes with an oblivious mama not acknowledging his signs for “up!”, found me and a lazy dog blocking his way. He made his stepping stone.

I think the message of the picture seems to be to step on anyone who gets in your way. Rather accurate coming from the Palin camp.

People for the Ethical Treatment of Animals (PETA) issued a statement criticizing the treatment of the dog in this manner:

It’s odd that anyone—let alone a mother—would find it appropriate to post such a thing, with no apparent sympathy for the dog in the photo. Then again, PETA, along with everyone else, is used to the hard-hearted, seeming obliviousness of this bizarrely callous woman, who actually thought it appropriate to be filmed while turkeys were being slaughtered right behind her in full view of the camera.

Palin, always one to try and have the last (if inarticulate word) came back with this snarky comment to PETA:

Did you go as crazy when your heroic Man-of-Your-Lifetime, Barack Obama, revealed he actually enjoyed eating dead dog meat?

Aren’t you the double-standard radicals always opposing Alaska’s Iditarod – the Last Great Race honoring dogs who are born to run in wide open spaces, while some of your pets “thrive” in a concrete jungle where they’re allowed outdoors to breathe and pee maybe once a day? (http://iditarod.com/ http://www.irondog.org/)

Aren’t you the same herd that opposes our commercial fishing jobs, claiming I encourage slaying and consuming wild, organic healthy protein sources called “fish”? (I do.)

Aren’t you the same anti-beef screamers blogging hate from your comfy leather office chairs, wrapped in your fashionable leather belts above your kickin’ new leather pumps you bought because your celebrity idols (who sport fur and crocodile purses) grinned in a tabloid wearing the exact same Louboutins exiting sleek cowhide covered limo seats on their way to some liberal fundraiser shindig at some sushi bar that features poor dead smelly roe (that I used to strip from our Bristol Bay-caught fish, and in a Dillingham cannery I packed those castoff fish eggs for you while laughing with co-workers about the suckers paying absurdly high prices to party with the throw away parts of our wild seafood)? I believe you call those discarded funky eggs “caviar”.

Yeah, you’re real credible on this, PETA. A shame, because I’ll bet we agree on what I hope is the true meaning of your mission – respecting God’s creation and critters.

Isn’t that homey? She used the word “critters.”

And by the way, Obama never said he “enjoyed” eating dog. In his autobiography ‘Dreams from my Father,’ Obama wrote that he was “introduced to dog meat” while living in Indonesia as a child. While he wrote that he remembered the meat as “tough,” he never says he enjoyed the experience. Gee, Palin getting something else wrong. I guess she still doesn’t read much.

And so, PETA takes that snark and ups Ms. Palin with this sassy reply:

PETA simply believes that people shouldn’t step on dogs, and judging by the reaction that we’ve seen to Sarah Palin’s Instagram photo, we’re far from alone in that belief. Palin’s Facebook response shows us that she knows PETA about as well as she knows geography. Yes, we campaign against the Iditarod because when the dogs aren’t being driven—sometimes to death—most live chained or inside cages for their entire lives. And we’re a vegan organization, so we sit on pleather couches, wear stylish vegan kicks, and consider fish friends, not food. (Also, by the way, we just sent a case of vegan caviar to Vladimir Putin—and no, you can’t see his house from yours, Ms. Palin.) We have no reason to believe that the Palin companion animals aren’t ordinarily pampered, and we wish the entire family a peaceful and humane 2015.