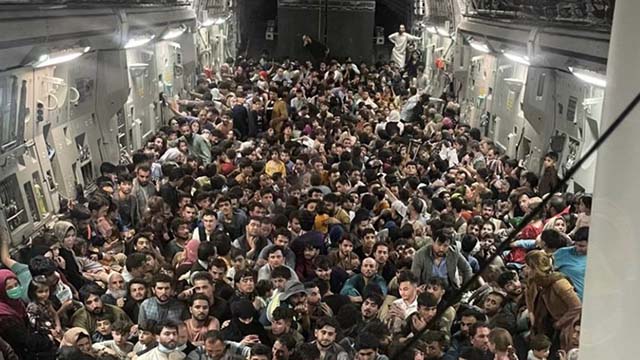 Following the chaos and mayhem that occurred at Kabul’s international airport on Monday, U.S. officials say flights evacuating diplomats and civilians have resumed on Tuesday.

Operations were suspended on Monday after thousands of Afghan civilians stormed the airport’s runway in a desperate attempt to flee the Taliban. Seven people were killed during the chaos, including several who attempted to climb onto departing U.S. military planes.

Approximately 3,500 troops are on the ground at Kabul’s airport as of Tuesday morning, with 4,000 expected to be there by the end of the day, according to officials.

Approximately 700 to 800 people were evacuated on seven flights overnight, including 165 American citizens. The rest are a mix of special immigrant visa (SIV) applicants and foreign nationals.

Axios adds that the plan is to have one flight per hour depart from Hamid Karzai International Airport with the hope that 5,000 to 9,000 people can be evacuated from Kabul.

The Taliban insist women will be allowed to work and study — but "within our frameworks." Asked to elaborate, a spokesman continued with vague answers: "We are guaranteeing all their rights within the limits of Islam."https://t.co/GYYAeN6w2K

In their first press conference since overtaking Kabul, the Taliban declared they want peaceful relations with other countries and would respect the rights of women within the framework of Islamic law.

According to Maj. Gen. Hank Taylor, a Pentagon logistics expert, U.S. troops have had no violent or hostile interactions with the Taliban during the evacuation operations as yet.

U.S. Army Major General William Taylor said that the speed of evacuations ‘will pick up’ at the Kabul airport and that there have not been any ‘hostile interactions’ with the Taliban https://t.co/vSUbubxj0m pic.twitter.com/0eoZDNiNBQ