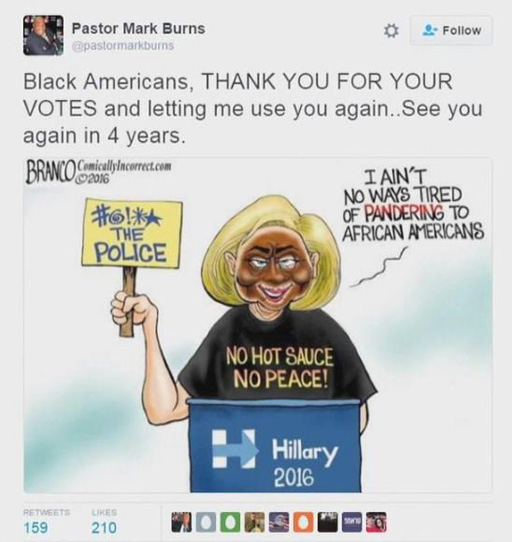 Multi-millionaire evangelist/Trump supporter Mark Burns apologized today saying he didn’t mean to “stir up the pot” when he tweeted a picture of Hillary Clinton in blackface.

In Burns’ now-deleted tweet, Clinton wears a t-shirt saying, “no hot sauce, no peace!” and holds an anti-police sign while saying, “I ain’t no ways tired of pandering to African Americans.”

Burns apologized to those he offended Tuesday, telling CNN, “It was never my intention to hurt anyone or offend anyone, but the message is very clear. The message I stand by, the methodology I do not.”

He said that the Democratic Party “has been using the black voting bloc.”

“The promises made to the African American community are not being carried out,” he said.

“I want to say to the people who were offended — obviously many people were offended by my tweet — that it was not my intention to offend anyone.”

Burns said that he did not create the cartoon and that it was tweeted at him. He said that the Trump campaign was not making him apologize.

“I still believe Clinton and the Democratic Party pander to black people,” he said.