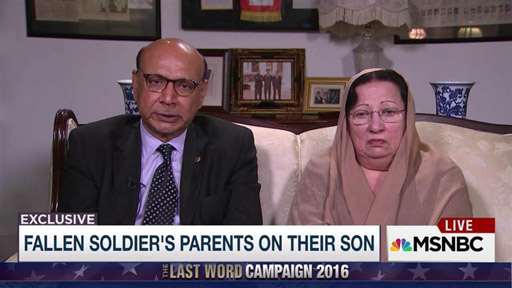 In the aftermath of the devastating appearance and speech by the parents of a fallen Muslim-American soldier at the Democratic National Convention, Donald Trump went on the attack saying the parents were being “used” by the DNC, that perhaps the father, Khizr Khan, didn’t actually write his speech (that’s rich considering the Melania Trump plagiarism debacle) and that Ghazala Khan wasn’t allowed to speak because Muslim families don’t allow women to speak, or some such nonsense.

Ghazala Khan had this to say about her appearance at the DNC and why she didn’t choose to speak:

Humayun is my middle son, and the others are doing so well, but every day I feel the pain of his loss. It has been 12 years, but you know hearts of pain can never heal as long as we live. Just talking about it is hard for me all the time. Every day, whenever I pray, I have to pray for him, and I cry. The place that emptied will always be empty.

I cannot walk into a room with pictures of Humayun. For all these years, I haven’t been able to clean the closet where his things are — I had to ask my daughter-in-law to do it. Walking onto the convention stage, with a huge picture of my son behind me, I could hardly control myself. What mother could? Donald Trump has children whom he loves. Does he really need to wonder why I did not speak?

Donald Trump said that maybe I wasn’t allowed to say anything. That is not true. My husband asked me if I wanted to speak, but I told him I could not. My religion teaches me that all human beings are equal in God’s eyes. Husband and wife are part of each other; you should love and respect each other so you can take care of the family.

The Khans spoke to Lawrence O’Donnell about the speech, Trump’s reactions and what they think this all means to the country.