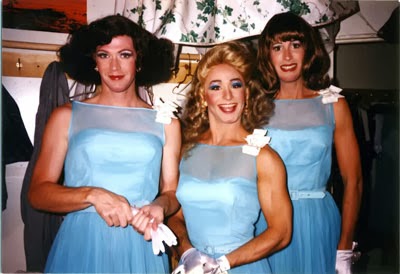 While I was still acting in New York City, I made my off-Broadway debut in a huge hit show called Pageant.

Opening to rave reviews, the show was a parody of what we put women through in beauty pageants across the country and around the world.  With six contestants vying for the title of “Miss Glamouresse” the audience is treated to talent, swim wear, evening gown and spokesmodel competitions.

And the best part?  The audience decides the winner each night – the cast has no idea who will win.

Immediately after the show opened, the production realized they didn’t have someone to understudy the contestants.  Quick audition held – one callback – and I got the job.  Two weeks later I was on for the fab “Miss Deep South” originally created by Obie Award winner David Drake.

I loved doing the show.  I was only with the production for the first three or four months as I got a job on the national tour of “A Chorus Line” which paid more.  But it was amazing fun to be in Pageant and the cast was brilliant.

Pageant is running on Monday nights for the rest of February at the Red Lacquer Club, home of the new Lucky Cheng’s.  Tickets are available here.

Head over to Queerty for more pics.