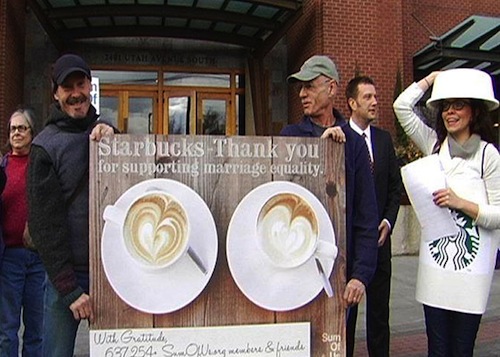 From The Advocate: National coffee chain Starbucks Wednesday received a card thanking the company for its continued support of marriage equality in its home state of Washington.

The National Organization for Marriage launched a boycott of Starbucks because the company’s leaders supported marriage equality legislation that recently passed in Washington. NOM recruited about 28,000 to “Dump Starbucks.”

However, a counterprotest to “Thank Starbucks” grabbed the attention of 640,000 marriage equality supporters.

The pro-Starbucks effort was organized by SumOfUs.org, MoveOn.org, and Washington United for Marriage, which submitted a card with 640,000 signatures at Starbucks’ main corporate offices Wednesday.

“We’ve been stunned by the passionate response to ‘Thank Starbucks’ – our most viral campaign ever,” Taren Stinebrickner-Kauffman, executive director for SumofUs.org, said in a statement. “We’ve seen in our campaigns that consumers expect corporations to do right by their workers and by their community. We hope that this overwhelming show of support for Starbucks for supporting gay rights will inspire other corporations to keep making similar public statements.”

“We are long-standing supporters of a culture of diversity, and inclusion and equality for everybody, and I’ll share this with our fellow leaders,” he said. “Thank you very much.”