Wow. This story just keeps getting bigger and bigger.

Goodman resigned from office last week after he was caught having consensual sex in his Ohio state office. But it seems that was just the tip of the iceberg.

Hull points out that the approach for the vast majority of men Goodman engaged was similar across the board.

Goodman has a reputation of reaching out to those involved in politics via Facebook messenger — but things tend to quickly turn south as he has been known to flirt with men, solicit sex, and even send pictures of his genitals, according to dozens of sources. The majority of the people he targets are between the ages of 18 and 24 and have had very little interaction with him personally.

In many instances of his alleged sexual misconduct, Goodman apparently offered to be a “mentor” for those looking to get into politics. Because of the power he had, his victims say they were afraid to report instances of abuse for fear of damaging their own political careers.

The sources informed IJR that many more photos of extremely explicit behavior — including Goodman in his underwear drinking beer, him showing his legs, and pictures of his penis — exist. Goodman always sent these on Snapchat to avoid the photos being saved, which is likely part of the reason why it has taken so long for his behavior to be exposed.

The source who received pictures of his legs and him drinking beer in his underwear told IJR that he thought about tweeting about the incident to call him out “for being a perverted weirdo,” but decided not to. He ultimately described Goodman as “a major creep.”

From one source: “Goodman asked me personal questions such as if I have a girlfriend or I was single and ‘how big I was down there.’ He also asked if I was the big or small spoon and the catcher or the pitcher. He would snap me late at night around 2 and 3 a.m. saying his wife was sleeping and he was bored and lonely.”

Goodman told one of the men he needed help “alpha to alpha” and that “it wouldn’t be gay if it’s just two alphas.”

Remember, this was all happening as Goodman maintained a public image that portrayed him as seriously homophobic.

Many of the men Goodman approached took pics of their phone screens to capture the interactions.

Here’s just some of the screen captures. There’s much more at the Independent Review Journal. I highly recommend reading the full article. 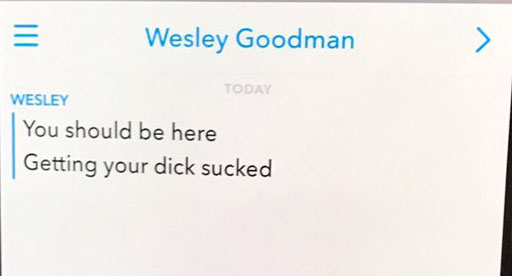