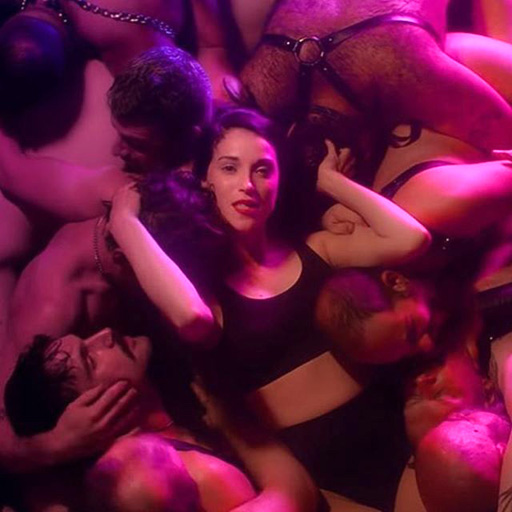 I know, I know… No one wants to see a dance floor full of sexy, gay, leather-clad, harness-wearing bears grinding and pawing at each other to an edgy, sweaty, hypnotic beat.

But if you did…

St. Vincent (whose real name is Annie Clark) recently reimagined her song “Slow Disco” into a sensual, euphoric remix and set the music video in a late night dance club.

Climbing over, under and around the crowd of shirtless men who are touching, swaying and making out, St. Vincent is basically swimming a virtual bear soup.

After shooting the video, the artist took time to strike a pose with her boys which she shared on her social media:

Produced by St. Vincent and Jack Antonoff, the singer says the remix was inspired by Taylor Swift, who Antonoff is close to.

“I don’t want to start a weird rumour or anything,” Clark said, “but I swear to God, you know because Jack Antonoff’s bros with Taylor Swift because they work together a lot, and I feel like Taylor was like, ‘You should make this a pop song’.”

She also shared that she imagined the sound of the track as a tribute to the Queen of Pop. “For me it was like, it’s such a homage to ‘Like A Prayer’-era Madonna.”

Announcing the release, St. Vincent tweeted to her 1 million followers, “Happy Pride. It was sweet of these boys to let me crash their party.”

Happy Pride. It was sweet of these boys to let me crash their party…
Watch: https://t.co/C2Bn4wMcPa pic.twitter.com/A4N1E4UefW

On YouTube, St. Vincent told her fans, “I always felt this song could wear different outfits and live many different lives. Here she is in disco pants, sweating on a New York dance floor.”

St. Vincent has previously shared that she doesn’t identify as gay or straight.

Speaking to Rolling Stone, she said: ‘I don’t think about those words. I believe in gender fluidity and sexual fluidity [so] I don’t really identify as anything.”

‘You can fall in love with anybody,” she added. “I don’t have anything to hide but I’d rather the emphasis be on music.”

Watch the visceral new video below.