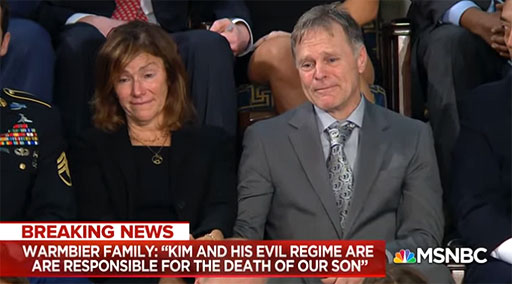 The parents of deceased college student Otto Warmbier, who was imprisoned in North Korea for stealing a poster, have issued a statement after Donald Trump told the world yesterday he believed North Korean President Kim Jong Un didn’t know anything about the student’s treatment in his country.

This answer was a disgrace to all Americans…

Don’t come back, you are not welcome @realDonaldTrump pic.twitter.com/GCY86CXOsf

That sentiment is a reversal from last year when Trump invited Otto’s parents to attend his State of the Union address and he blamed Kim Jong Un’s dictatorship for Otto Warmbier’s death.

In 2016, Otto Warmbier was arrested during a trip to North Korea after being accused of stealing a propaganda poster from his hotel in Pyongyang.

The 21-year-old was sentenced to 15 years hard labor by the North Korean government, but was released after 17 months.

He was returned to the United States in a coma, and died days later due to neurological injury.

This is Otto Warmbier, an American college student jailed in North Korea for stealing a poster.

Here, he begs for forgiveness.

When Kim Jong Un returned 22-year-old Otto to the U.S., he was deaf, blind, and died within days.

Trump on Putin: “He said he didn’t meddle” in our election

On Kim: “I will take him at his word” on Otto Warmbier’s death

The Warmbier family’s rebuke of President Trump is all the more remarkable when you consider that just last year, Trump invited them to and highlighted them in his State of the Union speech, in which he DID blame Kim Jong Un’s dictatorship for Otto Warmbier’s death. pic.twitter.com/DzOLqKUDxF