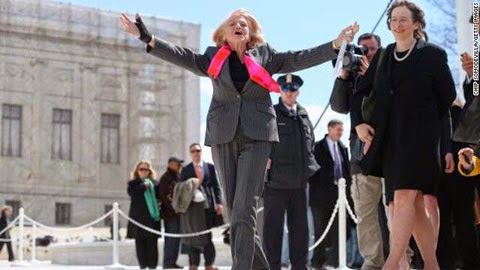 One year ago today, Windsor v. United States became one of the most important court cases for the lesbian, gay, bisexual, transgender and queer (LGBTQ) community.

Since then, every single one of the 13 court cases striking down same-sex marriage bans has used the Windsor decision at the core of their legal decision.

From Evan Wolfson at Freedom To Marry:

One year ago today — with smiles of joy and happy tears — we cheered as the Supreme Court announced its ruling to gut DOMA.

Our movement made history that day. And now tens of thousands of same-sex couples have their marriages respected by the federal government.

That landmark decision kicked off a momentous year, with 22 pro-marriage court decisions, including yesterday’s freedom to marry rulings in Indiana and the 10th Circuit federal appellate court. In just 12 months, we’ve grown public support to historic levels and won the freedom to marry in six more states.

Watch below as Edie Windsor talks with Marriage Equality USA about the historic ruling: