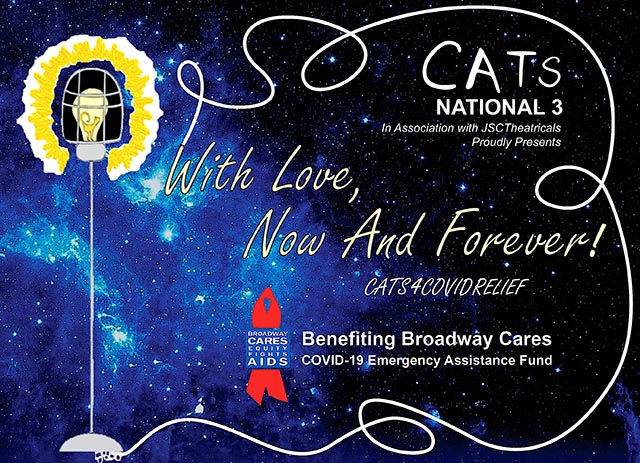 Recently I’ve reflected on the fact that SOME good things have come from the past 18 months. Namely, seeing how many people decided to be part of the solution instead of the problem.

Case in point: it was a year ago today that several of my CATS the Musical cast members reunited for the first time in over 30 years to raise money with Broadway Cares/Equity Fights AIDS for the Broadway community – actors, stage crew, musicians, box office, and more – during these difficult times.

It started with one cast member, Austin Jetton, coming up the idea of reuniting all those years later. And over the course of several months, we had a 30 streaming special celebrating our time with the kitty play.

I think we raised over $22K to help folks in need via the Broadway Cares Covid-19 Emergency Assistance Fund, which supports The Actors Fund.

You can watch the full 30 minute extravaganza (including me swinging my rehearsal tail) here:

If so inclined, you can still donate here.

Also, it’s important to acknowledge the amazing work of Seth Rudetsky and James Wesley who raised over $1 million to help those in need with their amazing streaming show, Stars in the House.

Seth and James graciously hosted myself, and fellow cast members Matt Zarley, JoAnn Hunter, Christine Toy Johnson, Jonathan Cerullo, and Leslie Ellis on what has become ‘The Tonight Show’ of Broadway on the night of our ‘premiere.’

Not only did we get the word out about our 30 minute special/fundraiser but we laughed and shared our own stories from the kitty box. #GoodTimes

You can watch those shenanigans – including me talking about surviving 800 performances as ‘the Magical Mr. Mistoffelees’ – below.

Finally,  it wasn’t just us – numerous Broadway/theater companies past and present came together to help others these many months. I salute my Broadway tribe for the humanity you’ve shown, demonstrated, and lived.