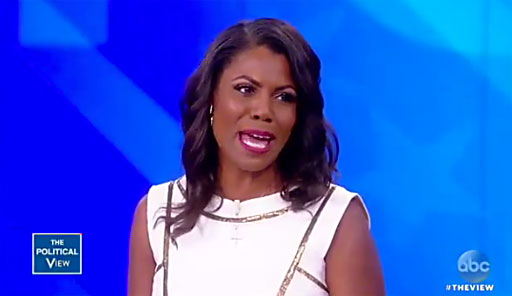 Former White House something-something Omarosa Manigault-Newman sat down on The View Monday and admitted to the world she regrets being “complicit” in the election of Donald Trump.

“It’s very clear if you look at the report from the intelligence community that Russia assisted Donald Trump with getting elected.

“He might ignore it but I actually respect the intelligence community and their findings in that report. Have you seen that report? It’s airtight.”

I freely admit I’ve never been a fan of Omarosa.

BUT – girl, has the receipts! She’s got the recordings and she’s playing them, so I’m tending to believe her account so far.

She also recently revealed that several White House staffers would use the hashtag #tfa (meaning “25th Amendment” which could technically remove Trump from office) in emails and communications when referencing a particular crazy Trump moment.

Watch Omarosa on The View below.

Former Trump aide Omarosa Manigault Newman to @TheView: “I was in a toxic relationship with Donald Trump and I regret that I was so complicit. You know, Hillary Clinton was robbed, and I was … a co-conspirator in that robbery” https://t.co/iyOFUSMPnv pic.twitter.com/ueWbgbi7tR

For more context, here’s the entire segment. In fact, here’s all the segments.