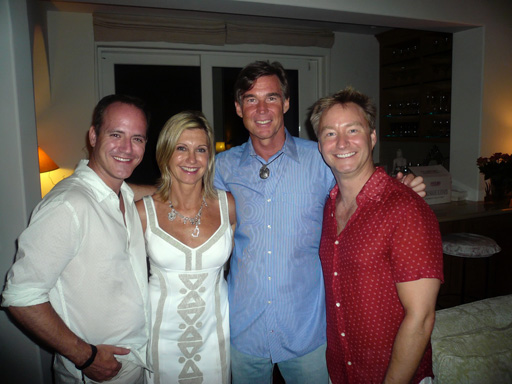 As regular readers may know, I’ve known Olivia Newton-John for almost 20 years as a personal friend. So very dear, and exactly as warm as you would imagine.

Olivia shared today she is postponing concerts this month to cope with a health issue.

Olivia Newton-John is reluctantly postponing her June U.S. and Canadian concert tour dates. The back pain that initially caused her to postpone the first half of her concert tour, has turned out to be breast cancer that has metastasized to the sacrum.

In addition to natural wellness therapies, Olivia will complete a short course of photon radiation therapy and is confident she will be back later in the year, better than ever, to celebrate her shows.

“I decided on my direction of therapies after consultation with my doctors and natural therapists and the medical team at my Olivia Newton-John Cancer Wellness and Research Centre in Melbourne, Australia,” says Olivia Newton-John.

There will be no interview requests accepted at this time as Olivia’s focus is on her treatment and healing. Ticket buyers for the upcoming concerts should contact venues directly about refunds. Rescheduled concert dates will be posted at OliviaNewton-John.com in the coming weeks.

Many will recall that Olivia was one of the first major celebrities to go public with her breast cancer journey in 1992. It was that journey that inspired her to help raise over $200 million to build the Olivia Newton-John Cancer and Wellness Centre in Melbourne, Australia.

She has also been a staunch LGBT ally for decades. She was one of the very first Aussie celebrities to come out strongly in favor of marriage equality in 2012. She’s also performed at packed Pride festivals in Los Angeles, New York City, Chicago and Sidney.

Olivia has been touring to promote her inspirational album LIV ON, a personal collection of songs about overcoming challenges and grief inspired by the loss of her sister Rona to brain cancer in 2013.

During my cancer journey in 2009, Olivia was in touch with me constantly checking on my progress and always offer her positive outlook.

She hates the words “cancer survivor” as she has viewed herself as a “cancer thriver” since she overcame breast cancer in the early 1990s. In fact, at the time she wrote a song she now calls her anthem, “Not Gonna Give In To It.”

I’m certain she’ll be back on stage sharing her music again very soon.