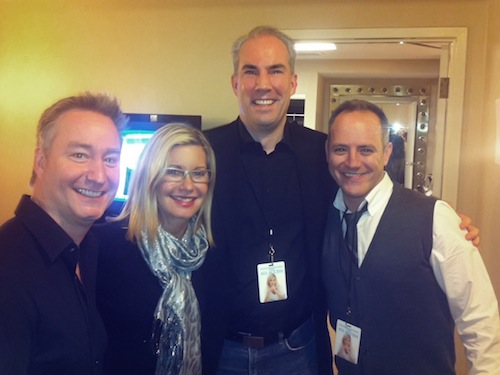 Had an amazing time last night in Atlantic City with Olivia Newton-John at her concert at Caesars.  The concert was sold out and clearly the audience was in love before Olivia even hit the stage.

Great set of songs.  Of course the hits (Xanadu, Hopelessly Devoted To You, Physical, Have You Never Been Mellow, all that…) a medley of her earlier country hits, some Christmas songs (Christmas on My Radio, Have Yourself a Merry Little Christmas), some new songs (Weightless from her upcoming movie “A Few Best Men”) and ending with songs from Grease.  It’s amazing that Olivia sounds almost better than she did 30 years ago.  She was in excellent voice.

For Michael’s birthday, I asked Olivia to bring Michael up on stage to be a T-Bird in “Summer Nights” which was huge for Michael.  His parents were with us, so they got to see Michael sing onstage with Olivia.  Very cool.

Then we had some time backstage with Olivia and the band before her bus had to head on to Albany.

One last thing I gotta say: Olivia was wearing some fierce black pants and looked amazing in them. Sex symbol in her 60s.  It’s obvious why the public is still in love with Olivia and her music.

With her fab new movie, 2 CDs in the works plus some other things, I’m looking forward to Olivia’s 2012.