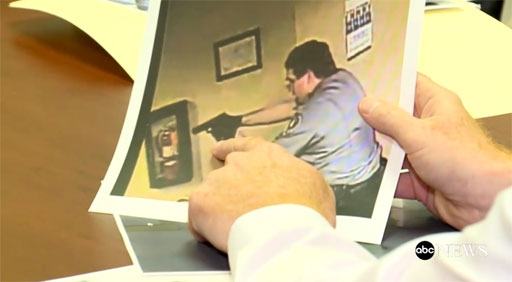 A white security guard in Ohio has pleaded not guilty to charges of aggravated menacing after he was caught on surveillance video pulling a gun on a uniformed black sheriff’s deputy because he was armed.

Lucas County Sheriff’s deputy Alan Gaston dropped by his local IRS office in Toledo on May 31 to inquire about a letter he had received.

Dressed in his full sheriff’s office uniform with his badge and gun clearly visible, Gaston was told by a security guard – identified as Seth Eklund – that he would have to leave his gun in his car to enter the offices.

Gaston explained he couldn’t do that as he was on duty so he decided to leave the office.

According to Gaston, the security guard attempted to take the sheriff’s deputy “into custody.”

Gaston told local ABC news affiliate 13ABC that he felt the best way to de-escalate the situation was to try and calmly walk away. The sheriff’s deputy works as a defensive tactics instructor.

“I was basically preparing myself to be shot at that moment,” said Gaston. “Bracing for a shot in my back. There’s really no way to know how you’re going to act when there’s a gun pointed at you and when you think you’re going to lose your life.”

According to reports, a worker at the IRS office made a call to 911 saying there was someone there with a gun. At no point did the caller mention that the ‘man with a gun’ was a sheriff’s deputy.

Gaston has filed a lawsuit against Eklund saying he has suffered emotional and psychological distress from the incident. He has been on medical leave from work since the incident.