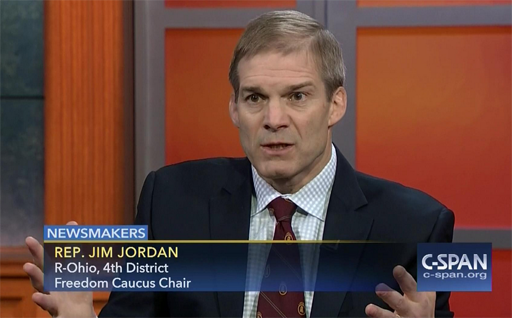 Rep. Jim Jordan, a powerful Republican congressman from Ohio, has been accused of turning a blind-eye to sex abuse during his tenure as an assistant wrestling coach at Ohio State University.

In April, the university began an investigation into allegations that Dr. Richard Strauss, who served as the team doctor, sexually abused team members from the mid-1970s to the late 1990s.

Jordan, who served as assistant wrestling coach at Ohio State from 1986 to 1994, has publicly denied any knowledge of the abuse.

But his denials have been called out as lying by former members of the wrestling team.

Three former Ohio State wrestlers have come forward saying it was “common knowledge” that the doctor regularly showered with the athletes and touched them inappropriately during appointments. They say its impossible Jordan would not have known about the abuse. One player says he told Jordan about the abuse himself.

Former head coach Russ Hellickson, Jordan’s mentor, said in a recent video — made by Mike DiSabato, a former wrestler — that Hellickson had told Strauss that he was being too “hands on” with students.

DiSabato, whose allegations against Strauss prompted Ohio State to open its investigation, called Jordan a “liar.”

“I considered Jim Jordan a friend,” DiSabato said. “But at the end of the day, he is absolutely lying if he says he doesn’t know what was going on.”

DiSabato said he reached out to Jordan this year, before going to the university, to tell Jordan that he planned to go public with his allegations. Jordan told him to “please leave me out of it,” DiSabato said. “He asked me not to get him involved.”

Another former wrestler, Dunyasha Yetts, told NBC News he informed Jordan himself about an awkward incident with the doctor in the mid-1990s.

“I remember I had a thumb injury and went into Strauss’ office and he started pulling down my wrestling shorts,” he said. “I’m like, what the f— are you doing? And I went out and told Russ and Jim what happened. I was not having it. They went in and talked to Strauss.”

According to Yetts, he and his teammates went to Jordan several times about Strauss.

“So it’s sad for me to hear that he’s denying knowing about Strauss,” he said. “I don’t know why he would, unless it’s a cover-up. Either you’re in on it, or you’re a liar.”

“Congressman Jordan never saw any abuse, never heard about any abuse, and never had any abuse reported to him during his time as a coach at Ohio State,” a spokesman for Jordan wrote in an email to NBC News.

After the NBC News story was published, Jordan’s rep added: “He has not been contacted by investigators about the matter but will assist them in any way they ask, because if what is alleged is true, the victims deserve a full investigation and justice.”

“There’s no way unless he’s got dementia or something that he’s got no recollection of what was going on at Ohio State,” Coleman said in an interview Friday.

DiSabato, however, has forwarded to NBC News an email he sent Jordan on April 24 asking Jordan to “give your full attention to the information attached to this email.”

“We [are] watching you, “ wrote DiSabato. “You have the platform to cut through the double talk, placation and finger pointing.”

Based on testimony from athletes in 15 varsity sports over the years, DiSabato estimates Strauss sexually assaulted and/or raped around 1,500/2,000 athletes at OSU from 1978 through 1998.

Jordan is a staunch ally of Donald Trump and is rumored to be a contender for Speaker of the House after Paul Ryan retires early next year.

Regarding the Ohio State scandal, Trump told reporters aboard Air Force One on Thursday, “I believe him 100 percent.”