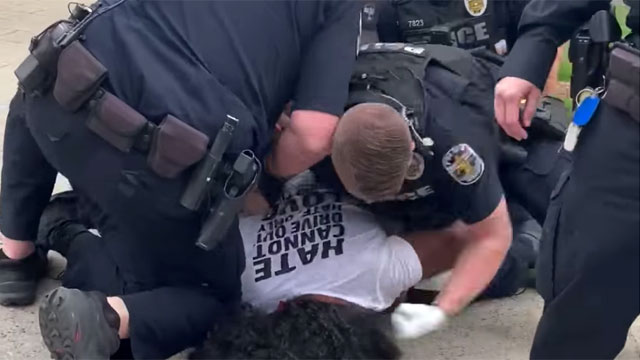 Disturbing video posted to social media appears to show a Louisville, Kentucky, police officer punching a protester as four other officers are involved in restraining the man.

A Louisville Metro police officer is facing an internal investigation after video surfaced on social media of him striking an individual several times in the face.

The video was posted to Facebook Sunday and shows five police officers involved in the attempted arrest of the man at Jefferson Square Park.

The four other officers continue to pin the man down as they try to arrest him.

The man, identified as Denorver Garrett, was booked on charges of disorderly conduct and resisting arrest.

Chief Erika Shields said in a statement, “This raises serious questions and is not consistent with LMPD training.”