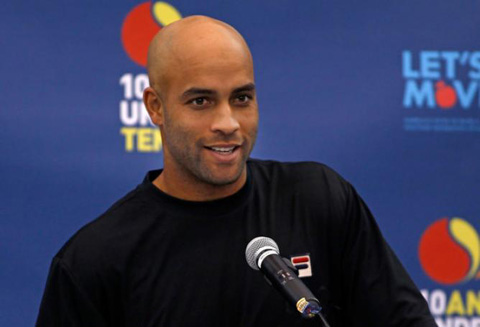 Earlier this week I reported on the disturbing treatment tennis star James Blake received at the hands of the New York Police Department.

In a case of mistaken identity, an undercover cop rushed Blake, tackled him, then slammed him to the ground and handcuffed him for 15 minutes. The cop never identified himself as a police officer. Eventually other officers were on the scene and they realized they had mistaken Blake for snother man being sought for identity theft.

Finally, Blake received an apology from the Chief of Police and the Mayor, but the cop who body slammed him to the ground never apologized. Not even a simple, “hey man, my bad.”

Identity theft is basically a white collar crime. There was clearly no sense that Blake was or would be violent. Some have wondered if the cop would have used the same force against a white man.

It’s also come to light that the officer, James Frascatore, has had a record of complaints.

The New York Police Department Friday released video showing the cop’s “detaining technique” with Blake, USA Today reported. Watch this and imagine this is your innocent son, peacefully checking his email while waiting for friends, and then this happens.  With no explanation.