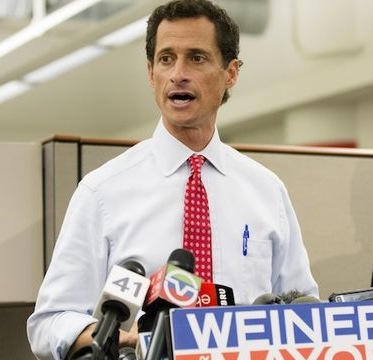 In the New York City mayoral race, some expected shifting in standing has occurred regarding the current Democratic candidates. Christine Quinn has improved her position from 20% to 25%, and Anthony Weiner has quickly dropped 9 points.

Talking Points Memo has the ins and outs of the first poll taken since “Anthony Weiner ‘sexting’ scandal 2.0” hit the news:

Weiner’s standing in the race has clearly slipped due to the scandal, though he’s not entirely out of contention. The poll showed him in second place in the Democratic primary with 16 percent compared to 25 percent for City Council Speaker Christine Quinn and 14 percent for both Public Advocate Bill de Blasio and former Comptroller Bill Thompson. Prior to the scandal, Weiner had been leading his rivals in multiple polls. The last Marist poll, which was released June 26, had Weiner with 25 percent, Quinn with 20 percent for Quinn, and Thompson with 13 percent. Weiner has dropped nine points since then.

By city election law if no candidate gets 40% in the primary on September 10th, the top two finishers go into a runoff on September 24th.