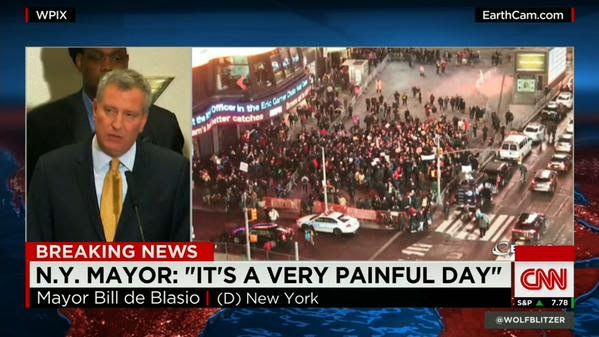 Just days after a grand jury declined to indict Officer Darren Wilson in the shooting death of Michael Brown in Ferguson, Missouri, a grand jury in Staten Island has decided not to indict New York City police officer Daniel Pantaleo in the death of Eric Garner, a black man who died after being placed in a chokehold.

Garner, 43, died July 17 while he was being arrested for selling untaxed cigarettes. In a video of the arrest, which has since gone viral, Garner screams “I can’t breathe!” multiple times until his body goes limp. A medical examiner later said that he died of a chokehold, a move that is banned by the NYPD, and ruled his death a homicide.

I’m not anti-police. I’m really not. But it’s difficult to see – given the video and the medical examiner ruling the death a homicide – how the grand jury didn’t see grounds for an indictment of involuntary manslaughter.

I don’t believe Daniel Pantaleo meant to kill Garner, but he did use a chokehold (an NYPD no-no) and he caused the man’s death, albeit by accident.

How is this not involuntary manslaughter?

Reports are now coming in that the Justice Department will investigate the death.